‘During the seventeenth century, chemists needed a broad conceptual system to explain what caused the chemical reactions they observed. The phlogiston theory of combustion was the first comprehensive theory of chemistry and it served to satisfy the need for a broad system of explanation. This theory was based on phlogiston; a substance that chemists thought was contained in all combustible substances. [It] was the first theory of chemistry that was able to explain a wide range of phenomena.’ [1]
The first person to come up with this principle was J.J. Becher in his ‘Physical Education’ book published in 1667. He proposed 3 forms of earth: terra lapidea, terra fluida, terra pinguis. Terra pinguis was the one that accounted for the combustion property of other substances. In 1703, G. , the student of Becher came with the concept of phlogiston, the name meaning ‘burnt’ in Greek. However, Tenney L. Davis showed that the term was used several times before Stahl, first by Haplius in 1606[2]. Stahl elaborated from Becher a new chemical principle, phlogiston, a substance representing the principle of combustibility that combined with other chemical substances to form compounds.[3] The phlogiston of Stahl answered in some measure to the souls and spirits assigned to metals and salts by the alchemists, or to what Geber called the ‘humidity’ and Cardan the ‘celestial heat’ of metals. Calx refered to a burnt substance, or a ‘dephlogisticated’ substance, that after being burnt it was thought to be in its true form .  So when by means of charcoal a metallic calx was reduced, or a compound containing sulphur was obtained from fused sodium Sulphate, phlogiston was supposed to be absorbed from the charcoal, which with aemp black and other reducing agents came in time to be regarded as nearly pure phlogiston. Bodies that would not burn were thought to have already parted with their phlogiston.[4] 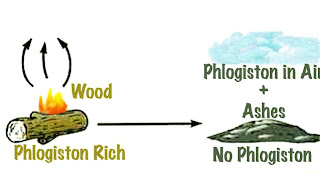 The theory had quite a strong explanatory capability. It was easily observable that a burning substance would cease burning if the supply of air was cut off. Robert Boyle had already demonstrated in the mid-seventeenth century that combustion would not occur in a vacuum. The phlogiston theory of combustion was able to explain this by assigning to air the ability to absorb phlogiston. When the air was fully saturated with phlogiston, combustion ceased. Combustion, therefore, according to the phlogiston theory, was completely impossible in a vacuum because there was no air to absorb the phlogiston.[6]
However, the theory of phlogiston was not perfect. Phlogiston was accepted by the 1770s despite some of its anomalous properties. Chemists could not satisfactorily explain why metals gained weight during combustion. If metals gave off their phlogiston during their combustion, should they not lose weight? In 1753, Mikhail Lomonosov attempted to repeat Robert Boyle’s experiment and concluded that the phlogiston theory was false. He wrote in his diary:
"Today I made an experiment in hermetic glass vessels in order to determine whether the mass of metals increases from the action of pure heat. The experiment demonstrated that the famous Robert Boyle was deluded, for without access of air from outside, the mass of the burnt metal remains the same".[7]
By the end of the eighteenth century, for the few chemists who still used the term phlogiston, the concept was linked to hydrogen. Joseph Priestley, for example, in referring to the reaction of steam on iron, whilst fully acknowledging that the iron gains weight as it binds with oxygen to form a calx, iron oxide, iron also loses inflammable air (hydrogen) and this is the substance of which phlogiston actually consisted. However, this was not enough to eliminate phlogiston theory. It remained until 1772 when Antoine Lavoisier propose his theory of combustion. Guyton de Morveau, a colleague of Lavoisier, had performed experiments showing that metals did without question increase in weight on combustion. Lavoisier used these results to propose his first theory of combustion--in all cases of combustion where an increase in weight is observed, air is absorbed, and that when a calx is burned with charcoal, air is liberated. This air he later called oxygen. This oxygen was what combined with metals during combustion and was what caused of the increase in a metal's weight on combustion.
Lavoisier's oxygen theory of combustion was almost the exact opposite of the phlogiston theory of combustion. In the phlogiston theory, phlogiston is released during combustion, and in the oxygen theory, oxygen is absorbed during combustion.[8] 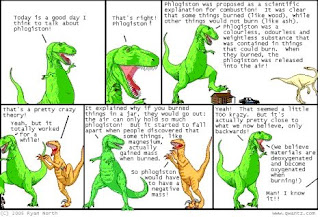 SX1508 Mankind in the Universe